Krahazik wrote: ↑
Tue Nov 05, 2019 9:49 pm
I have noted when exporting as an OBJ and hen importing into BLender, the hierachy of the model is not retained. Everything becomes 1 single object. Usually if th result appears ot be just a solid box, that seames to be one of the nodes which surrounds the whole model. If I switch to wireframe mode I can then see everything that is hidden by the box.

For exporting from Blender I have been using FBX as I can't get the exporter to work. It has a bug where its not correctly detecting my blender version and so keeps asking me to install the version of blender that I am using.

I did that with a custom built bridge using many in game objects to use as a guide to reconstruct in blender, exported in obj and import to blender and it was a nightmare.
it was so bad I realised that needed the plugin to work to export objects in and out so the workflow goes faster.
I had started a 16x map, but I have realised that without that plugin fixed, it won't be finished until about fs23 or later till it's done, so that's the reason I thought I would try and do something about the plug in.

BUT, it's a big job and will take awhile for me.

blender changed the code in blender where any new plug in's MUST be written in python3, this plug in (I Think is still at about 1.6 - 2.? maybe), so we are looking at a code update and possible re-write.
also how Blender now handles and structures things has changed significantly , for example as you all may have seen in 2.8 the new collections structure.

the extra work I am planning will also include user documentation, as well so there is heaps to do.

I already have some ideas on little extras to make importing and exporting function easier and faster.

next will (possibly) be code re-structuring ( I have already noticed some bits that could be improved , more due to change too python 3 syntax

added functionality, my one idea (of a few) is some how matching giants shader library (if possible) to blenders (kind of) so when you export out of blender the correct or (one you check in a list perhaps) gets written / added to file on export. (needs research)

I know last time i exported a file , it seemed to me there was things you had to do after exporting out of 2.79, that you had to add to the file after. The "shapes" file was one that comes to mind (unless i was doing it wrong), and yet when I have read the plugin files, it is actually in there in the plugin file as part of the export process and yet didn't seem to trigger, so that is one thing to me that seems to be broken that needs sorting out.

anyway that my two cents worth for now, time I get back too it. I will be keeping a eye on this thread for any ideas and problems that need to be fixed or added.
if you happen to decide to pm me, just a warning as the reply will not be quick as i am usually on the highway 5 or 6 days a week , short reply may be quicker , but long posts or answers like this will get shunted till i get home, keyboards on mobile devices infuriate me no end, and I am usually driving a lot too.
Top

I think they are aiming for a FS23 release

yeah it wouldn't surprise me, I will still be aiming for the plug in to be updated for fs19, because the main problem at the moment is, it isn't so much the farming simulator engine being updated , but that blender has undergone such a significant change that the compatibility with blender is the issue. once that is sorted out, getting it updated to wherever the giants is up too will catch up, blender is already up to 2.81, and they are working on 2.82
Top

I can't seem to make the exporter work properly anymore. I'm pretty sure I have used it before, but that was probably back in FS17.

Is anyone familiar with the error below? Any suggestions on how to fix it? This happens when I try to activate the plugin in Blender. 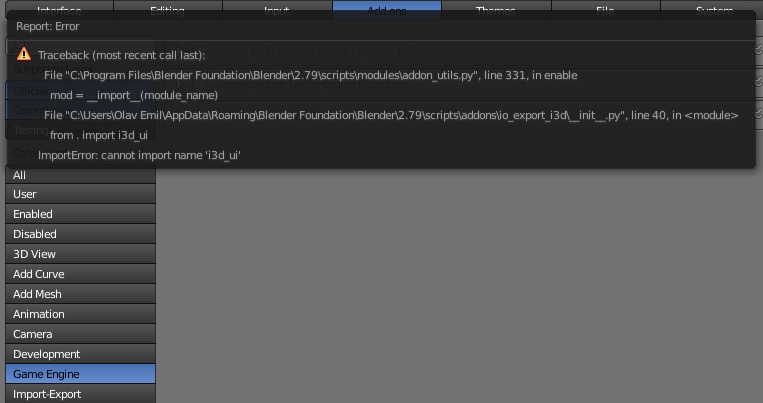 Can we expect Giants to release new version for Blender 2.8x or can we expect someone smart with enough knowledge in python to rework the exporter?
Top

It looks like a dead end to me ... but does anyone know what version of Blender it DOES work with? Because the Blender website has all the old versions.
Playing £300 PC with a £95 graphics card, £15 XBox controller and £65 SSD ... (and sometimes £200 laptop)
Top

Nld exporter been working great for me. Tyvm nld
Top


Thank you. Perhaps that is what it will take to finally be able to export from Blender again.

However, do you know how to install this one? It says "Installation is the same as the 2.79 version", but the 2.79 version (from Giants Developer Network) is an exe-file that self-installs, so that makes no sense. I also can't find any runable installer within the zip file, nor any readme or other installation manuals.
Top

unzip it and drop it in there

as far as i am aware it will work until 2.9 at least that is what FA says

Yup, unless blender makes any major changes before 2.9 then this one should work until 2.9 or until giants gives us some love

falcon70 wrote: ↑
Tue Nov 19, 2019 7:43 am
yeah it wouldn't surprise me, I will still be aiming for the plug in to be updated for fs19, because the main problem at the moment is, it isn't so much the farming simulator engine being updated , but that blender has undergone such a significant change that the compatibility with blender is the issue. once that is sorted out, getting it updated to wherever the giants is up too will catch up, blender is already up to 2.81, and they are working on 2.82

I decided to give it a go and forked his repository to play around with updating the plugin. Turns out the code was so horribly outdated that it seemed better to just begin from scratch, so that is what I have done.

Currently the exporter does just about the same as the old one, since my focus has been on getting it as close to the capabilities of what we already have, with the exception of adding support for using collections. I have also decided to remove all of the property export options as I do believe a UI overhaul is needed as well.

If you come across any bugs then don't hesitate to submit them here and the same goes if you have a feature request of something that you would like to see in the exporter.

Just a couple of pictures to show that things are working: