Hrmpf.. First I don't notice crops have gotten to second growth stage.. When doing contracts where crop doesnt get damaged I forgot I haven't put on narrow tires yet.. When I cut down trees close to fields and forget that trailer doesn't have nattor tires.. Won't be getting optimal amount of crops from those fields this autumn.. Though they're so small I guess the difference will hardly be noticeable..
Top

That was a lot of logging for someone not used to it.. But finally we have chainsawed through the area where we can extend our fields, using our trusty Strautmann SEK 802 trailer to carry the wood away to the sawmill. After the first month of summer, the June numbers are up:

The contracts income are a bit lower than we were hoping for, but selling wood has made a nice addition to our income.Those fertilize contracts costs us some fertilizer, but they are still good money as they are fast to do with a 30m working width.

Only trees left on our farm now is on the hill we are likely to leave as is. But we might want to take down the trees remaining down towards the road, as we may want to put buildings in place there at some time.
Top

Now in July with $230k in bank, we have enough money for a harvester, maybe even a decent one. But we are starting to get a lot of grass on our farmyard, so we have opted to take a chance and invest in grass gear.

We bought the Pottinger Novacat setup (8.4m working width) for $61.000 total. To keep it as cheap as possible as we need to get a harvester soon, we went for a Kuhn SR 314 windrower (8.5m working width) for $23.000, and the yellow New Holland Roll-Belt 150 baler ($49.000). To be able to carry the bales without too much swearing we also opted for the Ursus T-127 bale wagon that can load 8 bales for $39.000. Carrying half the content of the square auto-loading bale wagon and costing more than half of it, seems like a good option to make round bales livable. I see there's some cheaper options from mod that can carry 12 bales for a third of the price but that feels like cheating so I'll stick with this one.

That allows us to get quite a few grass bales. Hopefully we can sell some and possibly store some for animal food later.

Storage can become an issue though. I guess grass bales needs to be protected against the elements if I'm not to wrap them. The weather report doesn't say anything about rain yet, but I'm wondering what to do. Maybe we should get a shed we can store them in temporarily. 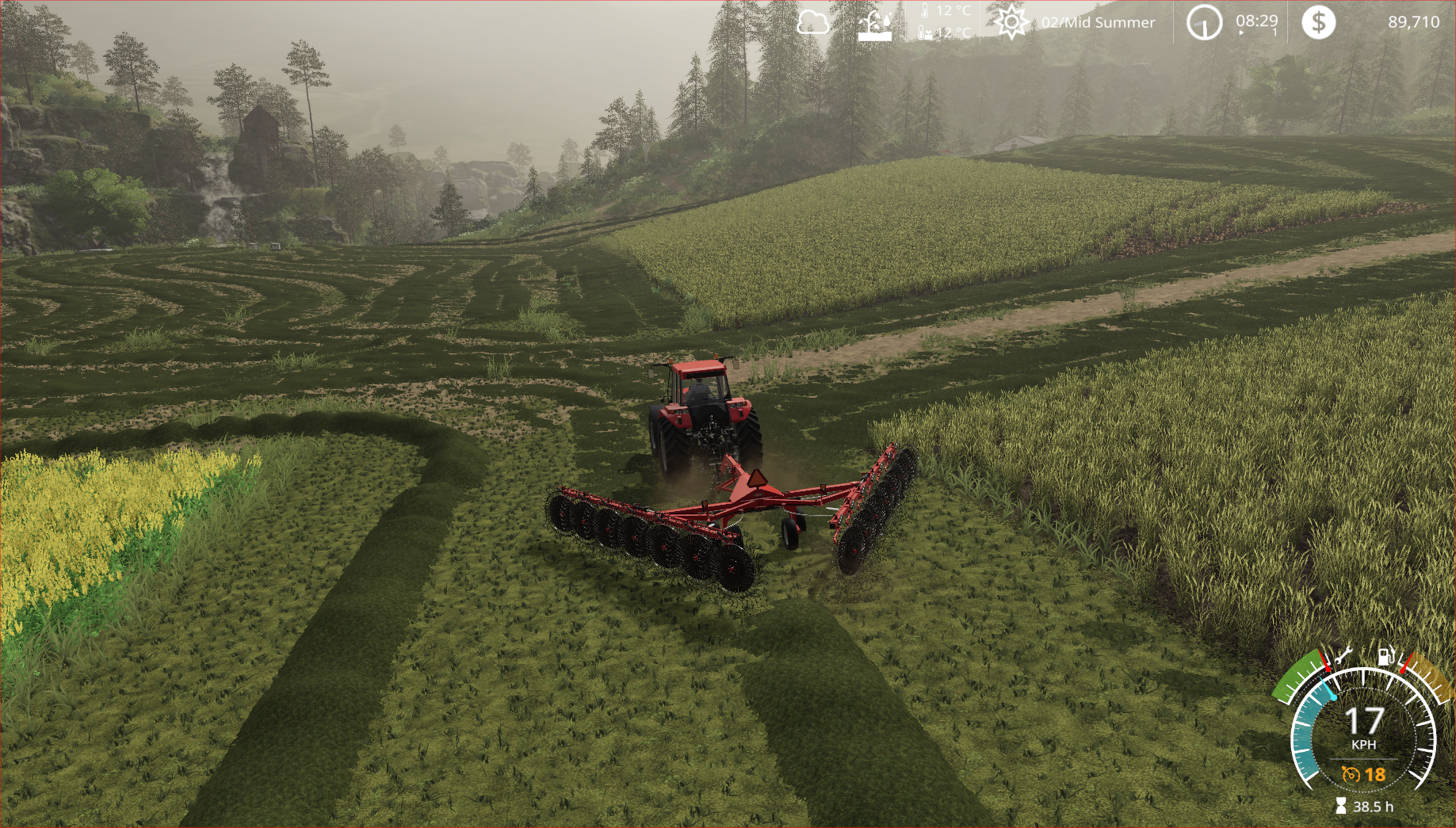 The SR 314 windrower was pretty easy to do. I expected it to get stuck on some of the various terrain here, but it actually worked out really well. The Kuhn Merge Maxx 902 is of course way more awesome on a big field where it can join two parts together into one row to create less driving for the baler, but that's a totally different price range.

Barn lists grass prices as zero though. Do I have to create silage out of it to earn any money from the bales? Hoped I didn't need to buy a wrapper, like the Kuhn SW 4014 as that's another $54.000 I want to save for harvester.

Missing out on fertilizer contracts earlier didn't matter though. I've gotten more than enough of them, and currently there's only one field left in ravenport that needs an extra fertilize step. I'm guessing they will be lazy as the rest of them and offer the job to us at some point. But that means that my current cash balance of $115.652 is pretty much the cash balance I'll have going into harvest season. Hopefully I can get a bit of money from some bales (have also saved some from baling missions that should have fermented by now), but we might have to loan a bit of cash to be able to afford a harvester.

And if we're going to help others harvesting too, it's tempting to loan more and get a decent one. Maybe we can earn enough money contracting to pay it of during harvest season and thus not have to pay interest for more than a few months.
Top

We actually ended up getting 74 round bales with grass from mowing our yard, including the new bits where we chopped down the forest. Much more than expected. Now the trouble is how to store it. I want a bale barn, but it costs $48.000 mod, and the bale barns store either round or square bales, and long term I hope to use square bales instead. I could sell them as I probably will get more easy enough for when I do get animals, but then I need to wrap and ferment them first. I could by a wrapping machine, but that's an expense I'd rather not have right now. I guess I could try to build a shack of some sort so at least I had some emergency storage under a roof if needs be.

Grass rains away on the ground, so I guess the round bales are also damaged by rain when not wrapped. I guess leasing a wrapper is also possible. I wouldn't need it more than an hour, so $2754 doesn't sound terrible, when the value of the bales after fermenting will likely be more than $15.000 at least.

We've basically got nothing critical to do now.. All fields in Ravenport are fully fertilized. But harvesting season starts next month, so not long until then. We've got some transport contracts we could do but I find them a bit annoying. They pay decent for the amount of game time put into them, but I feel like a lot of work compared to real time effort.

If I'm to put in a shed for emergency storage, before really having planned anything as to what goes where on our farm, the entrance to the farm looks enticing. The hill makes this part of the farm not much usable for anything else so putting it there it is unlikely to be in the way later, and as we expand later, most of our tools will probably drive of to be used anyhow. Trees seems to be in the way of landscaping and building placement though, so if we're to put it here I guess we need another logging effort to get rid of the trees along the side there.